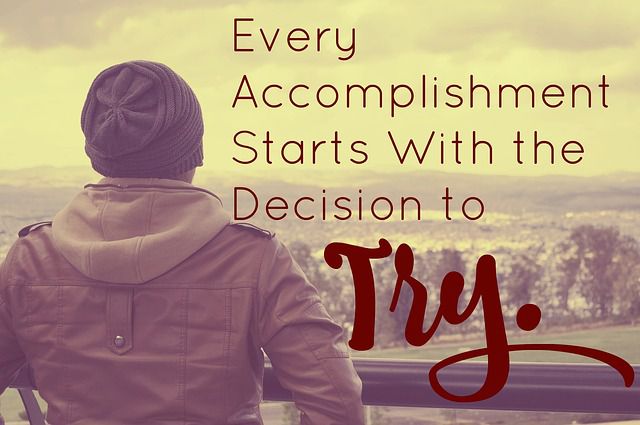 Have you been thinking of doing something new? Or maybe finally getting around to putting that dream of yours into motion? And every time you begin to think about it, the challenges seem to big. Before you know it you have talked yourself OUT of even TRYING!

I remember when I realized I was going to have to get both of my kids into college by myself. I had no idea how I was going to do it. It seemed such a daunting thing to do. There I was an everyday woman with a HUGE task in front of me. My kids never knew how much praying I did. Every night, I was on my knees asking for direction. I had reached a point where it didn't seem possible. I mean there were two of THEM and only ONE of me. The child support had stopped coming in AGAIN. Even though I was afraid that I would NOT be able to get both of them on their way, I decided to TRY!

I realized that the worst thing that could happen would be that they would not be ACCEPTED. I would concern myself with the particulars later! My daughter was first. She was reluctant to go. DON't ask why I do not know what she was thinking.

I got the application for her, made her fill it out to her complete disgust. Now three years later, she is a junior at a State University. All because WE TRIED!!

Then it was time to concern myself with my son. I was not concerned about him getting in, but we had to get his musical situation together. He has an insurmountable amount of talent, but at the time his confidence did not match his capabilities. Private Bassoon lessons cured that! He now plays seven instruments and marches TUBA in a DIVISION 1 college.

All this success from TRYING!!

There is something waiting on YOU to TRY!!!