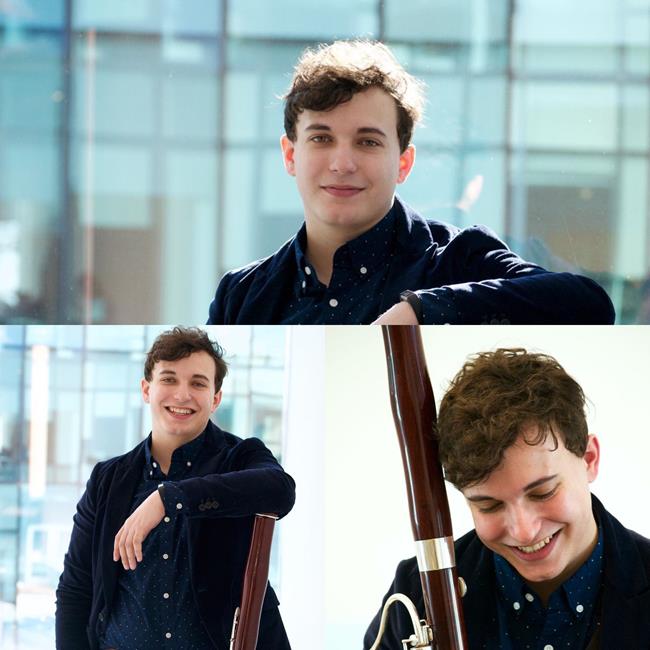 At the heart of anyone playing a woodwind instrument is the drive to achieve the correct embouchure. This is the term used to describe the way in which the musician applies the mouth to the mouthpiece of either a brass or woodwind instrument. This isn't something that just everyone can achieve with great success. Sometimes it is the difference between becoming a great musician and merely an average one. And then there are some people who were born with a innate ability, the right embouchure comes more naturally and takes little to no training at all.

I have learned all of this from having a son who (pictured above) was destined to be a musician. Two months into the beginning of fourth grade he asked me a question that would reveal his true purpose in life. That question was "Mom my friend James wants to play the clarinet and I do to. Can I?"With a budget that was already struggling, my then husband and I figured that the $18.30 monthly charge for the clarinet was well within our budget. At the time I was the typical Mom driving the kids everywhere. Although he and his friend James flew through the first lesson book in less than half of the school year. I just tossed it up to friendly competition. It didn't dawn on me until I met his clarinet teacher that there was more to this clarinet playing than I thought. The man came at me as though I was the goose who had laid a golden egg. You would have thought I was some kind of celebrity. All I knew was that for the first time in his life my son looked happy. When we went to his concerts, he and James were the first ones on the stage. They would talk onstage until the conductor called for everyone to take their positions to play the assigned piece. And in those moments I saw a light in his eyes and a happiness that I had never seen before. By the end of fifth grade our family dynamics had changed dramatically. I had survived breast cancer and faced my future alone. Ed had been selected to attend two weeks at the DARTS (day in the arts) program that is a part of the BSO (Boston symphony orchestra) It was good for him and myself to get some time away from one another. He needed to begin to make friends and I needed to begin to let go.

At first there really was not much difference. His father would come to the performances and talk with him afterwards. But as time went on I was the only one attending those performances. High School was approaching and two weeks before it began my Ed came home and announced that "This is the best time of the year!" I thought he had things a little mixed up since we had four moths until Christmas.And then he let me know that Band Camp was beginning in a couple of days and he volunteered me to make some home made chocolate chip cookies. As tired as I was from working, the light in his eyes and the true joy of this event produced one of the best batches of cookies I believe I have ever made.

By Thanksgiving of his Freshman year in high school, there were three cases for musical instruments in his room. After the second one showed up I stopped asking questions. My only concern was how I was supposed to fit all of them into my little Dodge Caliber. When he had five cases in his room I had to tell him to stop because I did not want to pack up the car and have to push it down the road because nether of us would be able to get in it. As a result of him playing all of these instruments, opportunity began to present itself. At first it was a four day stay at a hotel in Hopkington to be a member of the Massachussetts All state Lions Band. The other band mothers told me I was crazy to let him go. But one thing I knew was I never wanted to see that light of joy fade from his eyes. He needed to go and meet other kids who were just as passionate about music as he is. He missed four days of school and it was well worth it. He came back a more confident young man. He had made new friends and with the advantage of social media the members of that band stayed in touch and held reunions in Boston.

After that, opportunities began gravitating to him. That's what happens when you allow yourself to follow your passion. While in the All State Band he met the director of the Harvard Summer Pops program and at age 15 was playing a concert at the Hatch Shell in Boston. His years in high school were marked with new adventures that were made possible by his willingness to take chances and his ability to react positively to criticism. He auditioned twice for Districts and did not make it. After the last failed audition he told me that when he went into it he was thrown off by the judges asking him to do things differently than what he had planned. That was when I knew he needed help. The kind of assistance that only someone in music professionally could give him. I prayed everyday for a way to find this person and also the money to pay them with once I did. It all worked out and six months after his lessons began he made Districts and sat first chair bassoon. All of these experiences have made him a great success as he is now ready to graduate college.

The most important part of this story are the qualities that he has learned in his journey. They are: Stay true to yourself regardless of what others are doing, always look ahead as there is nothing for you in the rear view mirror, be good to those who are good to you and forget the rest, network,network and network, and finally, accept what others offer you without asking for more than they are able to give.